Many people are concerned about the impact that wind turbines may have on avian fauna and their concern is well documented.  Several studies conclude that a well-sited wind turbine poses much less danger to avian fauna than skyscrapers, house windows or highways. 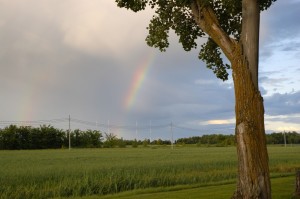 These studies suggest that a wind farm has little impact on avian fauna.  Avian and bat studies are automatically undertaken prior to the construction of a wind farm.  And when a potential wind farm site is analyzed, local avian fauna – protected or migratory species – must be examined. Systematic surveys of these species are conducted in order to determine the ideal wind farm site that will have the least impact possible on the environment.

In theUnited States, a major synthesis study of some 15,000 operating wind turbines (Erickson et al., 2001) found that, on average, each wind turbine is responsible for the death of 1.8 birds per year. In the case of raptors, mortality is estimated at one bird every ten years per wind turbine.

There are numerous studies on this topic.  For further information, feel free to consult the non-exhaustive list of references – mostly scholarly scientific articles – at the bottom of this page.

The same scientific attention is given to bats during wind farm pre-implementation studies.

All investigations required by the regulations are carried out during the environmental impact assessment.  These studies, which began in August 2008 and continued into the late summer of 2009, were conducted in accordance with protocols established by the Ministry of Natural Resources and Wildlife (MRNF) and Environment Canada.

Once the wind farm is operational, follow-up studies must be conducted in order to assess the wind turbines’ actual impact on the habitat of all these species and how they have adapted to the wind structures. This is part of a post-construction environmental monitoring program that must also meet standards set out in protocols with the MRNF and Environment Canada.

There is as yet no regulatory standard pertaining to migration corridors, but Kruger Energy can apply some safeguards to ensure that wind turbines have no impact on migratory species.  These safeguards are often proposed by the MRNF in response to in-depth documentation on a migration corridor and its position in relation to a wind farm’s site.

During these environmental impact assessments, more specifically during bird migration studies, precise data are collected in order to locate migratory corridors close to, or bordering, the wind farm.  These data are taken into consideration during implementation to ensure that the wind turbines have no impact on bird migration.  The MRNF is involved in the entire remedial action process for a migration corridor.